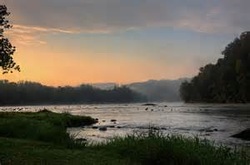 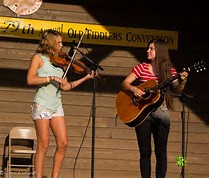 Fries (pronounced “freeze”) is a town in Grayson County, Virginia, United States. The population was 484 as of the 2010 census. Fries is part of the Blue Ridge area, and shares in that region’s old-time musical traditions

HistoryThe Town of Fries is located on the north banks of the New River about 24 kilometers north-east of the Grayson County seat in Independence. It was named for North Carolina cotton mill owner Colonel Francis Fries. Jim ‘Pipe’ Carico (of Stephens Creek, Virginia, the nearest incorporated town) contacted Fries in 1900 and proposed Bartlett Falls on New River as a site for a hydroelectric dam that could power a cotton mill. Fries purchased the surrounding rural farmland then hired a local labor force to build a dam, a cotton mill and a full-service company owned town. By 1901, the New River Train was extended to the mill site and Fries petitioned the Virginia State Legislature to incorporate the new town of Carico, VA in honor of Jim ‘Pipe’ Carico. For reasons that are not well documented, the town name was instead legislatively changed to Fries, Virginia and officially incorporated in 1902. Despite the heavy reliance on manual labor, mules and oxen, the town’s construction progressed quickly and the open call for employment spurred migration to the town. Around 300 houses, a post office, a church and a company commissary were wedged into the surrounding hillside before the mill began operation in February 1903.

Although the entire Appalachian region is known for its Bluegrass and traditional, or “old-timey” music and musicians, the region around Mount Airy, North Carolina is one of the few areas of the United States where this music has remained prominent, even among young people. The Old Fiddler’s Convention, one of the most prominent traditional music contests in the United States, has been held annually in the nearby city of Galax since 1935.[6] It has long attracted the best up-and-coming bluegrass musicians. The Blue Ridge Music Center with its amphitheater and music museum of old-time music is just a short distance away on the Blue Ridge Parkway at Milepost 213.

The New River Trail is 57 miles long that parallels the scenic and historic New River for 39 miles. Our location has access points to both attractions enticing visitors of all ages to hike, bike and horseback ride. Fishing is popular among locals and visitors and there is primitive camping sites along the trail.